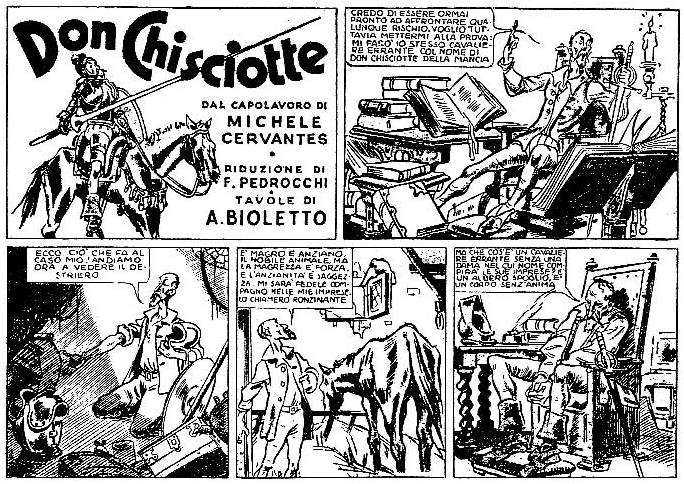 Angelo Bioletto (30 September 1906 – 26 December 1987)    also known as Nino Bioletto, was born in Turin  ( Italy) and worked in a graphics studio before he started drawing for the daily La Stampa. There, he had his own features, such as ‘Biolette ha Visto’ and ‘Taccuino di Bioletto’. Bioletto was responsible for the merchandising of the radio series ‘I Quattro Moschettieri’, and illustrated some comic adaptations of the serial.

Bioletto joined Mondadori publishers in the late 1930s, where he worked on the ‘Don Chisciotte’ comic with writer Federico Pedrocchi. Bioletto and Pedrocchi have also worked together on ‘La Rosa di Bagdad’ (‘The Rose of Baghdad’, 1949), directed by Anton Gino Domenighini. Other famous names who animated on this picture were Libico Maraja, Federico Pedrocchi and Fernando Carcupino. However, the production of the film folded, and after a brief stint for Carriccio, Bioletto turned to journalism. In the 1948 he returned to comics, illustrating several stories with Disney characters for Topolino.